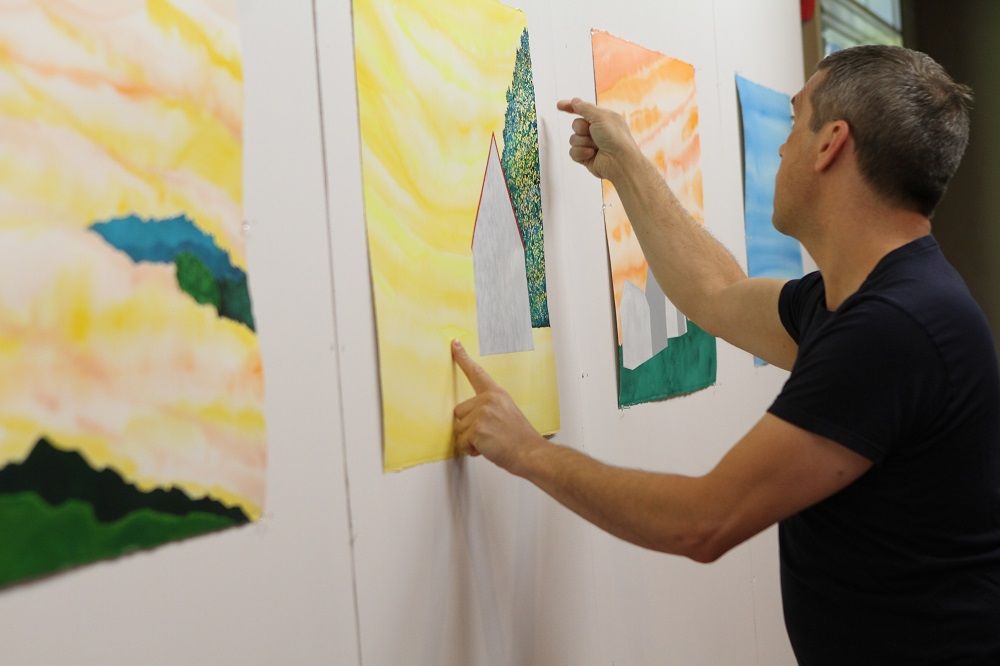 Isherwood finishes up at Mabel Residency in RI

James Isherwood just completed the Mabel Artist Residency at the Norman Bird Sanctuary in Rhode Island on Tuesday, September 17, 2019. Ishwood was 1 of 10 artists to participate in the first session, from September 3 – September 17.

James Isherwood, who lives in Brooklyn, is working on paintings from a room that resembles something out of a Wes Anderson film. Wood panels frame the space, which is accented with green cabinetry, an assortment of taxidermized birds and cats positioned near the rafters and shelves of colorful children’s books. Two tables are stationed in the center of the room for painting, and a makeshift 20-foot wall has been installed for hanging work.

Isherwood has been enjoying long walks around the property, and said he is inspired by the landscape, especially the clapboard architecture of the buildings by the beach, which he will recreate in his paintings using a bright palette and a surreal color scheme, portraying the scenery through a psychedelic lens.

As he told those gathered at an artist talk held Sept. 5, his work usually features “an idealized view of a place that doesn’t actually exist,” generally rendered in “unnatural colors that are sort of jewel tones,” all with the aim to capture the romance of a landscape and “meld abstraction and different textures to show movements of time over a long period of time.”

The “Mabel Residency,” consisting of 10 artists, will be introduced through four free events in September, honoring Mabel Norman Cerio, an avid artist who was constantly inspired by the land she eventually established as Norman Bird Sanctuary.