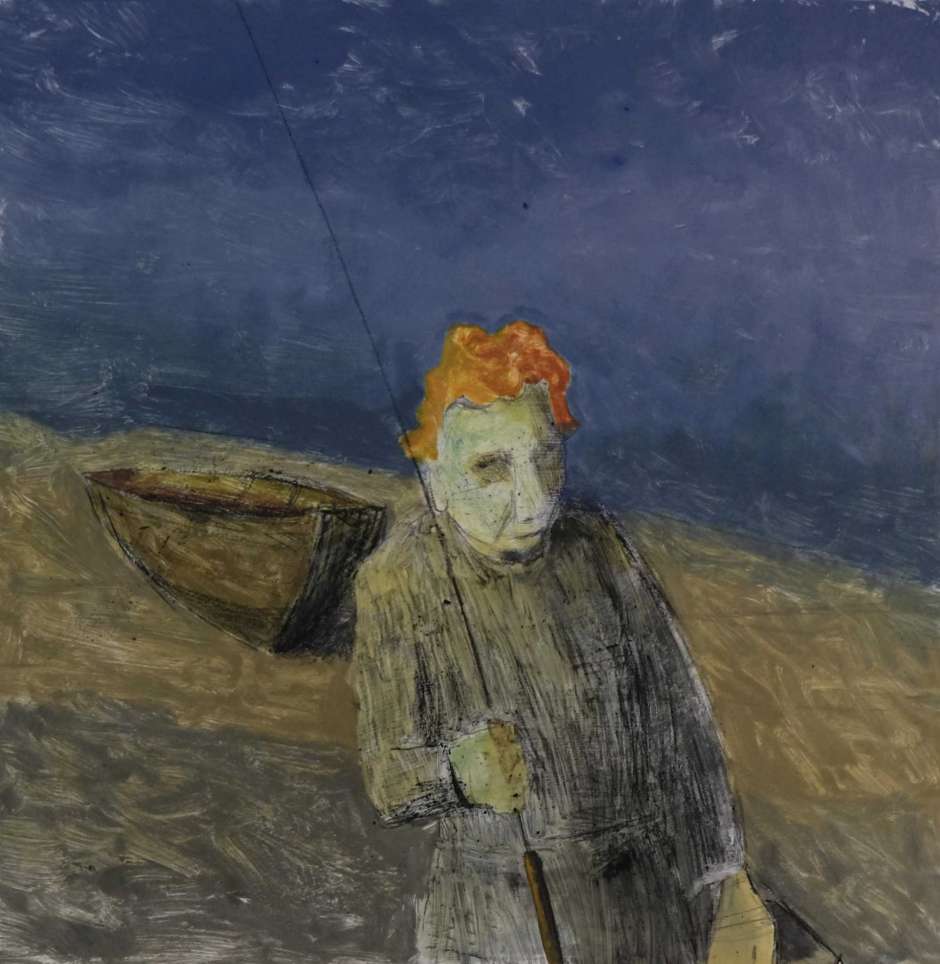 Writer Joel Lang on Malcolm Moran in ‘Saints and Sisters’

The saints on display in the Greenwich artist Malcolm Moran’s latest exhibit, at the Susan Eley Fine Art gallery in Hudson, N.Y., come in two varieties: the canonized and those he considers saintly.

An example of the first is a Moran Saint Francis, who bears zero resemblance to the bearded, skyward gazing figure often portrayed. This one is clean-shaven, with wide-set, black button eyes and tufts of orange hair sticking out from under what could be a food worker’s cap. Viewed from a distance, he’s seated in a chair and pointing to a black bird perched on his head.

In religious art tradition, a bird may symbolize an angel, Moran said. But this bird looks cartoonish and quizzical, while Francis, whose other facial features are barely gestured at, looks mystified. A caption reads, “He was having a thought when a bird landed on his head. He lost his thought but the bird did not seem to care.”

Moran’s depiction of a personal saint named Selina is the opposite in some ways. She’s seen close-up, her face nearly filling the frame. Her wide mouth and triangle nose approach Cubist distortions. Her eyes are especially pronounced. Huge, round and close-set, they gaze fiercely at the viewer.

Both saints come from the same place, stylistically. Like the dozen others in the exhibit, they present as painted portraits. Most, however, began as monoprints (images drawn or painted directly on clear plate) that Moran may modify after running them off a press. In no case does he intend them to be remotely realistic likenesses.

“I’m not after making a picture. I’m after telling a story. I’m after explaining the spirit of a person, or a situation,” Moran said. “Susan (Eley) was probably right when she said I’m a natural modernist. I was very unrestrained by the need to make a pretty picture.”

Even so, his bird-brained Francis and fierce Selina have direct connections to Moran’s own life. He grew up in New Orleans, where his family ran a printing business founded by his great-great-grandfather. He was newly married and house hunting, when in one house a parakeet got loose and landed on his head.

“Instead of shooing him off, I walked around and looked at the house with the bird on my head the entire time. I didn’t take it (as a blessing) at the time, otherwise I would have bought the house,” he said. “It indicated to me it was a sign. I’m not going to go so far as to say I believe angels are flying around me. But if there’s a little saint in all of us, there’s also a little devil. That’s a theme of my work,” he said.

Selina’s impact was deeper. His childhood caretaker, whom he regards as his second mother and understood to be part Chippewa Native American, had stunning green eyes. She and her husband both tended the family for years.

“I don’t know what effect working for a white, well-off family had on them,” he said, acknowledging racial privilege. “But I do know one thing. She had these beautiful green eyes. She’d look at me and I knew those eyes were telling me something. Sometimes it may be something I didn’t want to hear. But sometimes, they said, ‘I love you.’ And that was awesome. They took care of me the first half of my life and we took care of them the last part of their lives.”

Moran said his own parents were adventurers who sometimes took the children along. His father, a Navy pilot during World War II, flew the family all over Latin America, often landing their plane in fields. He himself remembers spending summers in Mexico and learning Spanish at a communist language institute in Cuernavaca.

He lived in Mexico for several years in the mid-’70s after graduating from the University of the South in Tennessee as a history major. He left Mexico to get a BFA in painting at the Rhode Island School of Design. Soon, however, he was drawn back to New Orleans to run the family business. He continued to paint, but devoted himself to it full time after selling the business and moving to Greenwich, his wife’s hometown, about 20 years ago.

Moran divides his portfolio into themes. One is a series of palm trees and another of horses. He connects both to his youth, but the horses came from another adventure. At age 11 or so, he clung to the back of a runaway in the Sonoran desert. He says it taught him lessons about perseverance and the illusion of control. He’s always been inspired by people, though.

Those in one of his earliest exhibits, in 1982, at a gallery in Providence, have distorted features much like his later saints. He said his style hasn’t changed so much as the stories he tries to tell.

In fact, his Saint Selina and his Saint Benedict could be siblings. They come from the same print series, with almost identical nose and mouth, but wear different expressions because of their eyes.

Another feature common to his saints, canonized or not, is that their heads are slightly swollen out of shape and bowed. One painted figure, “Margaret Contemplating Another Time,” sags like a rag doll.

“There’s something very weighty, very heavy about life. And I try to capture that,” Moran said. “Everybody comes into this world and we’re all stuck with a weightiness on us. From a physical standpoint that means gravity. Gravity is always pulling on us, until it pulls us into the grave. And yet within everybody is this other thing. That thing beyond the grave. I just happen to believe in that. I’ve seen tragedy and I’ve seen people who live beyond the tragedy. Selina is a good example of that. She had a very hard life. But she never, ever let it get to her. I respect the weightiness of life. I don’t look at it as tragic. I just look at it as life.”

Moran shares his exhibit at Eley’s Hudson gallery with another artist, Deirdre O’Connell. Titled “Saints and Sisters,” it was originally planned for Eley’s gallery in New York City, but was delayed and moved because of the COVID-19 pandemic. Eley herself is the daughter of Carole Eisner, a Weston artist best known for sculptures made from scrap iron.

O’Connell is a self-taught painter who has had a long career as stage and television actor. Her “Sisters” are painted paper backed by wood, like icons. Though adorned with lace, they are sisters of Eve, unclothed. Several have split apples on their heads, targets of sin. The barest, least adorned Eve has a black bird on her head.

Moran said he considers O’Connell another storyteller, and wants time to study her work. As Eley might say, they are in dialogue with one another. Their joint exhibit runs through Nov. 15 at the Susan Eley Fine Art gallery in Hudson, N.Y.

Joel Lang is a freelance writer.

Originally published in the CT Post print edition on October 10, 2020: 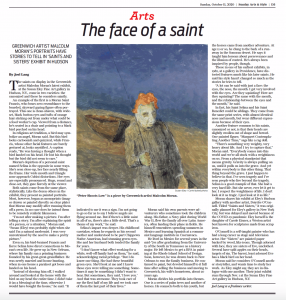